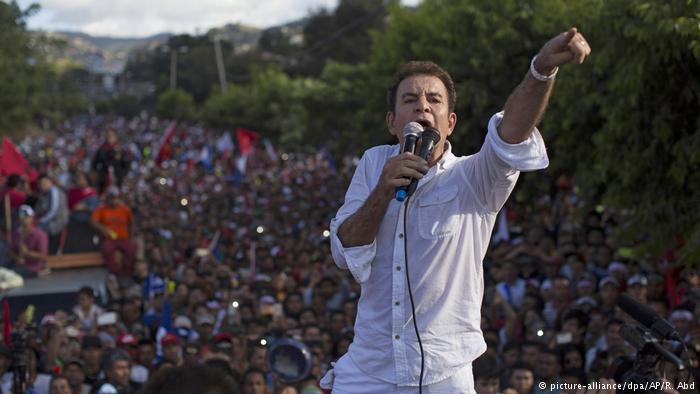 Opposition candidate Salvador Nasralla (pictured) wants a recount or runoff to resolve the political standoff that continues in the wake of the November 26 election in Honduras. Incumbent President Juan Orlando Hernandez and his National Party of Honduras (PNH) appeared ready to accept the challenge on Tuesday.

Read more: Trump responds to Theresa May: ‘We are doing just fine!’

“The National Party of Honduras and especially our maximum leader, Juan Orlando Hernandez, have no problem with reviewing the final result,” PNH boss Reinaldo Sanchez said. He suggested that parties could compare their copies of official records from ballot boxes. “The victory, God first, is ours, but we must wait with patience, in peace, and in tranquility for the good of our beloved Honduras,” he said.

Nasralla appeared set to win until counting suddenly halted and Hernandez took the lead when it restarted. Though the Supreme Electoral Tribunal (TSE) has not certified the results, Hernandez looked to have won with 42.98 percent to Nasralla’s 41.4 percent and 99.98 percent of votes counted.

After the TSE agreed to recount ballots from 5,173 stations, former President Manuel Zelaya, leader of the left-wing opposition, increased the demand for all stations — more than 18,000. TSE president David Matamoros said candidates could file challenges through Friday: “We want no doubt to remain,” he said.

On Monday, Nasralla called on supporters to engage in civil disobedience and ignore an 8 p.m.-to-5 a.m. curfew to protest a trail of fraud that he said led all the way back to the TSE. Critics of the government have taken to the streets multiple times since the election,  sometimes engaging in fights with the police, looting, and vandalism. About a dozen people are reported to have died; security forces have detained 1,200 protesters.

In a rare case of police showing solidarity with protesters, however, 2,000 officers have refused to fight demonstrators. “The federal police has a responsibility to Honduran society and will not repress the people,” a spokesman for the agency’s elite Cobra unit said. “We want peace and demand that the politicians use political methods to settle their differences.”

After officers refused to enforce the curfew designed to quell protests, thousands of people left their homes overnight to show their support for the striking police. Televised images showed uniformed officers dancing with neighbors and chanting “JOH out!” in a reference to Hernandez’s initials.

Nasralla applauded the disobedience, saying “crucial moments for democracy in Honduras” had arrived.