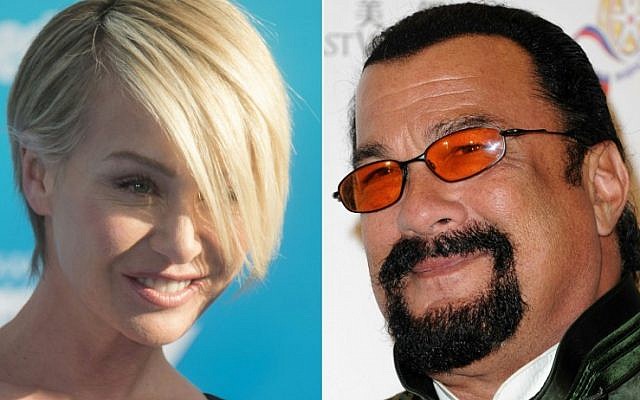 Forty-four-year-old de Rossi was the first to speak out against the 65-year-old filmmaker and she detailed her alleged experience with him in a Twitter post on Wednesday, November 8. “My final audition for a Steven Seagal movie took place in his office,” she recalled. “He told me how important it was to have chemistry off-screen as he sat me down and unzipped his leather pants. I ran out and called my agent. Unfazed, she replied, ‘Well, I didn’t know if he was your type.’”

The Scandal actress’s wife, Ellen DeGeneres, expressed her support by quoting the tweet and writing, “I’m proud of my wife.”

Jenny McCarthy came forward with her own claims during a SiriusXM radio interview on Thursday, November 9. “I purposely wore a mumu to the audition so the casting people would actually look at my face and watch my work. I walk in and I shake his hand with a firm grip just to show him how professional I am. No soft lady shake This is a serious actress handshake,” the Dirty Love star explained. “And then I noticed that there was no one else in the room. Now I’ve been on a few auditions and there are at least two people in every room. But I talked myself out of it, like, ‘Well, he’s a celebrity. So maybe it’s normal.’ So I stand across from him and he plops onto a sofa that’s near a fireplace and taps the sofa cushion next to him saying to me, ‘Take a seat, relax.’”

McCarthy claims she politely declined the Under Siege director’s alleged invitation and remained standing in front of him. “He keeps bragging and bragging about himself, and watching out of one eye to see if I take the bait,” she remembered. “So he says to me then, ‘You know, this part has nudity in it and I can’t really tell what your body looks like in that dress that you’re wearing.’ In my head, I’m like, ‘OK, here we go. Sound the alarms. This is not a test this is the real thing. Activate all defense systems.’ But I so wanted to legitimately read this part that I wasn’t going to give up yet.”

The Scary Movie actress told the Hard to Kill director that her agent told her there would be no nudity, to which she claims he replied, “Well there is off camera nudity … I can’t tell what your body looks like in that dress. Can you lower it for me?”

The former Playmate claims she asked Seagal if they could focus on the script. “My little papers are shaking in my hand. He says, ‘I know you must have a beautiful body underneath there. Can you lower it so I can see your breasts?’ I paused, I looked up at him, went from shock to sadness. My eyes filled with water and I yelled, ‘Go buy my PlayBoy video. It’s on sale for $19.99’ and just took off.”

McCarthy claims Seagal then followed her to her car. She claimed he warned her not to tell anybody of the alleged encounter, “Or else.”

De Rossi and McCarthy join numerous women in Hollywood who have come forward with accusations of sexual misconduct. North of 60 women have made allegations against Harvey Weinstein, and notable actresses including Selma Blair and Rachel McAdams, have made claims against director James Toback.

As previously reported, Weinstein has been expelled from the Television Academy and was left by his wife, Georgina Chapman. Both Weinstein and Toback have denied all allegations made against them.