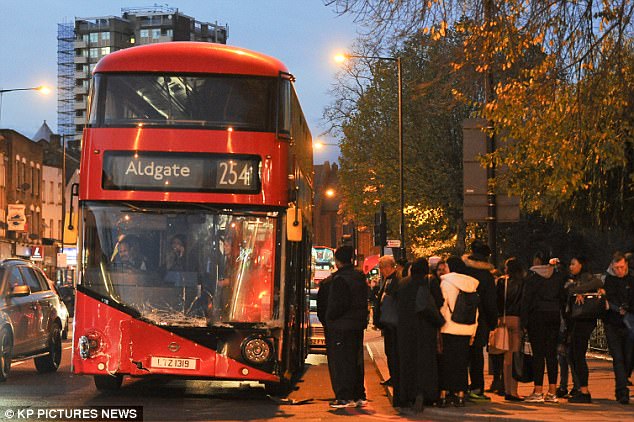 This is the horrifying moment a London bus plowed into vehicles in Hackney, East London, as passengers pleaded with the driver to stop.

Two people suffered minor injuries in the crash, which happened on Lower Clapton Road at around 4.40pm.

Dramatic footage posted on Twitter shows the number 254 bus, which was heading to Aldgate, smashing into a black 4×4 without stopping.

An eyewitness outside the Ten Ten Kitchen restaurant reported seeing one vehicle, which was carrying a baby, being pushed hundreds of yards down the road.

Passengers on board the bus and members of the public reportedly tried to stop the driver, who did not appear to stop straight away, the eyewitness said.

Photos from the scene show a policeman talking to the driver of the bus as shocked passengers and passersby gather on the pavement.

Others show two damaged vehicles on the side of the road.

It is not yet clear why the driver collided with the vehicles or failed to stop.

A Metropolitan Police spokesman said: ‘Police were called at approximately 16:40hrs on Thursday, 9 November to Lower Clapton Road, E5 following reports of a Route 254 bus in the collision with a number of vehicles.

A TfL spokesman said: ‘At approximately 4.30pm today a 254 double deck bus operated by Arriva, collided with three cars in Lower Clapton Rd between the Lea Bridge roundabout and Cricketfield Rd, E5. An investigation is underway.’

The spokesman added that there was no significant impact on traffic flow in the area.