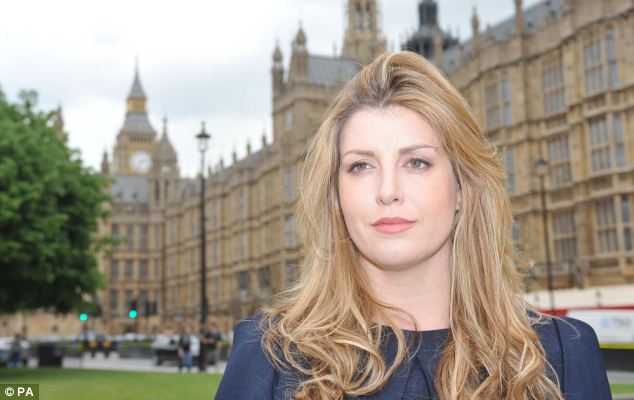 A minister who once appeared on a reality TV show was appointed as Priti Patel’s Cabinet replacement this afternoon.

Work and Pensions minister Penny Mordaunt, a Brexit supporter, was named as International Development Secretary by Theresa May in the second emergency Cabinet reshuffle in a week.

The 44-year-old MP for Portsmouth, who is a Royal Naval Reservist, became best known to the public through appearing on Splash!, the TV contest where celebrities were taught to high dive.

The appointment of the only female Minister of State who was a strong Brexit backer became inevitable when Brexit backers warned Mrs. May not to appoint a Remainer to succeed Ms Patel, a passionate pro-Leave campaigner.

Renowned at Westminster for her ripe sense of humour, Ms Mordaunt once raised eyebrows by confessing to making a Commons speech packed with innuendos to win a bet with a group of Royal Navy officers.

The paratrooper’s daughter also joked during her TV appearances that her bosom would not pass the so-called pencil test, saying: “I could probably hold Her Majesty’s Stationary Office under my bosoms.”

Ms Patel resigned last night after admitting to more unauthorised meetings with Israeli government figures. She had been accused of trying to change foreign policy via backchannels and was ordered home from Africa to be dismissed.

Her downfall came a week after Sir Michael Fallon quit over allegations of improper conduct, and with Mrs May’s deputy Damian Green still under investigation for alleged sexual misconduct.

Friends of former International Development Secretary Ms Patel revealed she may speak out in next week’s critical Commons debates on the EU Withdrawal Bill — confirming she intends to be an outspoken pro-Brexit force on the backbenches.

Rumblings about Mrs May’s leadership intensified, with one ex-minister saying she could be gone within weeks because “at least 40” Tory MPs felt they were in a “leadership crisis”.

Under party rules, 48 names would trigger a confidence vote.

The former minister said more MPs felt Mrs May should depart. “There is a crisis of leadership in the party,” he said. “It is inevitably going to end only one way, and I would prefer her to go with dignity.”

Sir Craig Oliver, who served at No 10 under David Cameron, said Tories were “crying out for someone to take a firmer grip”.

He urged Mrs May to take the risk of a full reshuffle and assert her authority. “There’s nothing to lose now,” he said. “Be on the front foot and show you are in charge.”

Earlier, former Tory leader Iain Duncan Smith warned that only a minister with “strong Brexit views” would be acceptable to MPs.

“The balance on having strong Brexit views is one that in all probability the Prime Minister will certainly look for,” he told the BBC.

The former party leader, a figurehead for pro-Brexit MPs, backed Mrs May’s continued leadership. “Theresa May is the one person that can actually unite the Cabinet, unite the party,” he said.

Ms Patel was in her Witham constituency this morning after being summoned back from Africa yesterday and resigning over undisclosed meetings with Israeli officials. She said her conduct had fallen below the standards required of her post.

“Priti will be speaking up for our amazing country and our people next week,” said a friend. Sources indicated that plans for a wider reshuffle are on hold.